IT SEEMS THAT every day another country announces the closure of Amnesty International groups in schools as a result of the organisation's pro-abortion policy.

Catholic schools in Scotland are the latest to join the exodus from AI. According to the Scottish Catholic Observer, one of these schools, Glasgow's Holyrood Secondary, is the largest high school in Europe and has had an active AI group for more than 20 years.

The newspaper quotes a Holyrood teacher explaining his school's decision to disband its AI group: “I felt we had to withdraw not just because of the policy, but because of the way it’s presented, which was one-sided and unwilling to account for the pro-life viewpoint," he said.

The director of the Scottish Catholic Education Service Michael McGrath said he did not expect any Catholic schools to continue their support of AI and encouraged schools to campaign for human rights and justice and peace through other organisations. “While many Catholic schools have been generally supportive of Amnesty International in the past,” he said, “rather than having hard ties to the groups I think that support will now go down.”

Mr McGrath also said that schools would also be encouraged to question AI on why it had adopted the new abortion stance.A spokesman for AI in Scotland said that he would welcome an opportunity to discuss the situation with the Catholic authorities directly. Unfortunately, the point is that AI has not listened to its members in the past - many people have emailed this blog suggesting that AI did not respond to their letters. The decisions of the school boards should not be of any surprise to AI as they had been cautioned of the consequences of their decision.

The consultation process that AI conducted in the run-up to the adoption of the policy has been widely discredited and AI has yet to explain why Amnesty International UK continued to tell members the consultation was ongoing long after a decision had been reached.

THE TIDAL WAVE of schools dropping Amnesty International following the organisation's decision to adopt a pro-abortion policy continues unabated with the news that 328 Australian Catholic schools will quit AI.

The director of the Catholic Education Office in the Archdiocese of Melbourne, Stephen Elder, said his office had made repeated attempts to contact Amnesty over the issue to raise its "serious concerns about the policy". However, he said efforts to discuss the stance had proved fruitless. This is unsurprising as Amnesty International refused to respond to many members' queries on the issue over the last couple of years, and some sectors went as far as misleading their members (see previous posts). Now all of the archdiocese's schools will cut their links with AI in favor of other human rights groups.

Maria Kirkwood, assistant director of religious education and pastoral care in the Melbourne archdiocese, added that a significant number of schools had supported Amnesty programs over many years.

A spokesperson for Amnesty International Australia confirmed to the newspaper that a number of schools had already written to the organisation to withdraw membership. As mentioned in a posting yesterday, the organisation faces a potential long-term crisis in supporters; many adult members became involved with Amnesty through their school or church - the establishments that AI's policy has now rejected.

Schools out for AI

CATHOLIC SCHOOLS in Northern Ireland are breaking their ties with Amnesty International following the organization's decision to advocate abortion as a human right.

Next month the Irish bishops will meet to discuss whether or not any of the Church's schools should maintain links with AI, but moves by some schools in Belfast would indicate that it is a foregone conclusion that the policy throughout the country will be to drop AI in favour of other human rights groups. The auxiliary bishop of Down and Connor, Donal McKeown

said that his diocese had already taken the view that it would be inappropriate for Catholic schools to continue supporting Amnesty.

"Amnesty's espousal in recent months of campaigning for abortion access in limited circumstances will leave many people in a difficult situation, " he said. "All we are saying here is that it seemed inappropriate in those circumstances for Catholic schools to be promoting the organisation."

The deepening rift between many current members and AI over its pro-abortion stance will have longer-lasting implications for the organization: since its formation by the Catholic Peter Benenson in 1961, it has become common for Catholic schools to establish an AI group of their own, or to at least support the organization's campaigns and many former pupils have gone on to support the organization after they left school. With its decision to divide its membership base, AI is likely to lose the prospect of longer term supporters.

In Canada, the Catholic Bishops Conference is also expected to make a strong statement condmening Amnesty's aborion move when it meets in October. Last week St Basil's Secondary School in Ontario, Canada announced that it would no longer have ties with its local AI group.

In Australia the Bishops have already called for AI to reverse its policy and in August St Aloysius College in Sydney, Australia announced that it would disband its Amnesty International group and instead establish a Benenson Society at the school to campaign for human rights.

ITALY'S Conference of Catholic Bishops has called Amnesty International's decision to campaign for abortion as a human right "astounding."

Criticizing the organization's recent decision to promote abortion, the President of the conference Monsignor Angelo Bagnasco said: "These are departures that warn us further of the dangerous erosion afflicting human conscience."

With the customary response to the mounting criticism leveled at the organization, an Amnesty International spokesman said that AI was not trying to argue that abortion is a human right, but as has been discussed in previous posts, this argument is based on semantics. The organization has stated that it believes abortion to be a woman's right and that as a "human rights" (unfortunately, we must now use quotation marks when appending this phrase to AI) organization, it should champion that right. Many AI supporters of the new policy are happy enough to accept that AI is now advocating abortion as a human right, as are the opponents of the new policy; however it is AI's press officers and leaders that have a problem with the term, believing it will generate bad publicity among supporters and potential members. The organization has yet to reveal the details of their two-year consultation process.

Last week the Australia's Bishops condemned Amnesty's move; the US and Canadian bishops have also criticized the organization and several prominent members of the British Catholic clergy have resigned their membership of the organization, urging Catholic members to reconsider whether or not they can continue to support a pro-abortion AI.

THE CATHOLIC Church in Australia has become the latest group to call for Amnesty International to reverse its policy on abortion.

In a statement one of Australia's most senior Catholic clerics Archbishop Philip Wilson said that AI's pro-abortion stance was "deeply regrettable" and said that AI had "moved to a concept of human rights founded not upon the good of the human person, but simply upon the autonomy of the individual."

“Catholic people have had a long association with Amnesty International, going right back to its inception and the two bodies have been closely aligned in their commitment to social justice,” he said.

“However, Amnesty International has now adopted a position, under the misleading term of ‘sexual and reproductive rights’ which is at odds with the Catholic understanding of the dignity of the human person and sexuality.

“This decision has led some people, including some Catholic school groups, to withdraw from membership of Amnesty International and to seek other ways in which to pursue the same aims of fighting injustice, ending human rights abuses and standing in solidarity with the imprisoned and the oppressed.”

Archbishop Wilson said that he had written two letters on behalf of the Australian Catholic Bishops Conference during the past year, urging Amnesty International to abandon the policy change.

“Unfortunately, despite similar entreaties from people the world over, Amnesty International decided to proceed with the new policy,” he said.

“We will now consider the situation carefully, in consultation with the Catholic education sector and the many other arms of the Catholic Church in Australia which have had association with Amnesty International.

“It is not too late for Amnesty International to take stock of the damage being caused by this change of policy and to return to its former neutral stance on abortion. I would urge them to do so.” 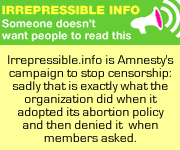